Everyone knows the rivalry between Borussia Dortmund and Schalke. The Ruhr valley rivals make the greatest derby of German football and for their fans, there is no better thing than beating the other team in the two matches they played during the Bundesliga and finishing in a better position. This year, Dortmund is the one ahead on the league table, in the first position and points ahead of the second place. Schalke on the other side is on 13th place with just 18 points in 17 matches.

And, after a not very good first half of season, Schalke fans still had to face a not so funny (depending on the point of view, of course), “joke” made by their rivals on Twitter.

Sure that sending good wishes, hugs and kisses are common actions in New Year, as well as saying what you expect for the year that just arrived, but Borussia Dortmund took advantage of this moment to make small irritancy to his arch-rival Schalke 04.

Through their Twitter account in English, the current Bundesliga leaders asked what goals people have for 2019, but also put their response: “block negative things in our life.”. The phrase came accompanied by an image in which the account of Schalke was being blocked by Dortmund in the social network. 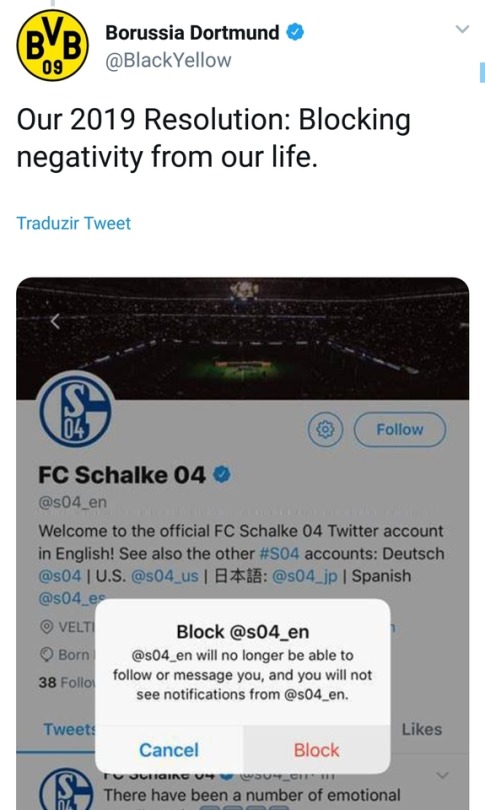 After that, things will certainly get a little more exciting for their next encounter, which unfortunately will be only on April the 27th. But until there, Schalke fans will have to keep quiet, while Dortmund fans continue celebrating and mocking their biggest rivals of all times.